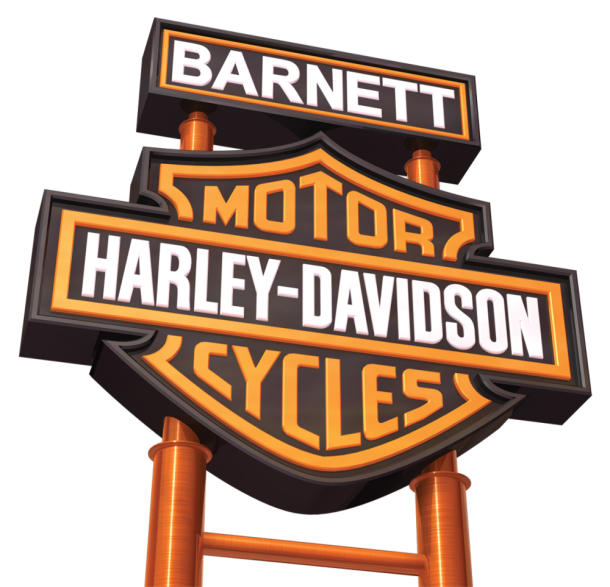 Sherman Barnett came to El Paso in 1961. He worked in the car business for many years. His son Mark began racing motorcycles in 1973 and after looking in the garage at nine racing motorcycles in various states of repair and disrepair, the senior Barnett thought to himself, “I need to get these things wholesale.” At that time, the opportunity arose to own a Yamaha shop. Yamaha of El Paso was born and in its eight years under Sherman’s leadership led the nation in sales twice. In 1977, Al Jones who owned the Harley-Davidson dealership next to Yamaha of El Paso on Montana, asked Sherman to take over the dealership. Al had been the Harley dealer for decades but the lapses in quality in the 1970’s took much of the fun out of the dealership for him. I remember going over to the Harley store to redecorate and re-organize. We put up hand drawn signs for the departments and set out four large barrels of 99-cent T-Shirts. That was a circus. All the shirts were seconds, so you had to pull them out and look at them carefully before making your purchase. First thing Monday morning, several employees had to go through the giant pile of discarded T’s on the counter and get them all back into the right barrels.

The hamburgers and hot dogs started at this time and the cooking was normally done by Sherman himself. This was in pre-litigious times, so a keg of beer was set out next to the grill and everyone just helped themselves. That was the second job on Monday mornings after sorting the t-shirts. George Tourk and I used to have to grab fly swatters and kill all the flies. There was beer spilled all over the showroom every Saturday and we were greeted with dozens of drunk flies every Monday morning. Not your model corporate representative at the time.

The recession of the early 80’s, the devaluation of the peso, and severe Japanese bike overproduction, took out the then two Yamaha stores so Christy and my father settled into the Harley-Davidson store permanently. Times were so tough that one week, the factory called my father and asked if he could purchase 70 1983 XLX883 models. They needed the money by Friday to make payroll. A friend of ours came along and financed the deal. It took a long time to sell those 70 little solo-seat bikes. Of course the Evolution engine came along to save the Motor Company in 1984 and in 1986 Sherman and Christy became the first dealership in the USA to sign up to have Harley-Davidson Corporate create a “Designer Store” for them. Business took off in the late 1980’s and soon they had over 200 Harleys in inventory at any one time and were among the highest volume dealerships in the USA. I was in school in Boston and New York in the late 80’s and began shipping Harleys from New England down to Texas in my spare time. In 1990, I took it up full time and when I left New York City to return to El Paso, I was shipping over 400 used Harleys a year.

In 1996, with the Motor Company very nervous about it, my father opened the current facility which at the time was the largest Harley-Davidson dealership in the world. The Motor Company wanted my father to sign a paper in case the whole thing went bust; they wanted it clear that they had warned him that they thought it was too extravagant. My father turned out to be right, the Harley-Davidson boom hit in earnest and the showroom designed for 167 motorcycles soon had 400. In later years, we had as many as 800 on the premises. Now, the large, freeway-located dealership is standard and practically required across the nation. In the winter of 1997, we published our first issue of Barnett’s Magazine. It started out as a Harley classified ad magazine, but that went south when eBay came along. After converting to a general enthusiast magazine, it began selling in Barnes and Noble, Walmart, and 7-11’s across the country and newsstands in 26 countries around the world. Eventually the magazine went online and now the staff puts all their work exclusively on Facebook, with 70 feature bikes per week presented for discussion for our 4.1 million followers.

My sister Kim help set up the big store in 1996 and then started Barnett’s Las Cruces Harley-Davidson sixty miles up the road in 2000, she is both the General Manager and Controller. My brother Curt joined us at the El Paso store in 1998 and helps manage the El Paso store and is involved with purchasing used vehicles.